Anasayfa > UTM Firewall > Pfsense > En > What is Firewall and Pfsense

What is Firewall and Pfsense

Definition of Firewall and What PfSense is Capable Of?

Firewall is a system that can actively block viruses and other unauthorized entities from gaining access to internet.

In the above picture internet reaching to the firewall in firstplace .Due to the state of rules it can approve or dissapprove to internet connection.Inshort it filters the internet and send it to our system.
Firewall systems mostly use in small,medium,big enterprises and also in schools,internet cafés shortly every net connection that possible to connect to prevent cyber attacks on servers if its necessary.

The PfSense is a free,open source customized distribution of FreeBSD specifically tailored for use as a firewall and router that is entirely managed via web interface.In addition to being a powerful filexible firewalling and routing platform, it includes a long list of related features and a package system allowing further expandability without adding bloat and potential security vulnerabilities to the base distribution.The pfSense project has become a fairly popular project with more than 1 milllion downloads since its inception and proven in countless installations ranging from small home networks protecting a single computer to large corporations,universities and other organizations protecting thousands of network devices.

What is pfSense stand for?

• Prevent cyber attacks to your internet connection
• Restricting URL’s that you dont want to reach by users.
• Booking visited URLS and sort them in dates.
• Time restricting that prevent usage of Yahoo , Messenger by clients.
• With MAC Filtering specs.can block other mobile phones or laptops to use your internet connection without your permission.
• In your firm or home you can categorified restrictions to block specific contents such as game,forums,adultery sites etc.
• By the filtering you can protect your clients from harmful contents in the internet
• .Categorified users (Students,teachers/superiors,personel,accounting dept etc.) with this you can classify categorize to filter their internet connections.
• Create user and password infos for clients to reach internet.With this method for example ; you have a WiFi with password protection even client have WiFi password they will never use your WiFi connection without proper user name and password infos.

PfSense can use on VirtualBox as a VM or you can use your own computer with min configuration specs which are describe in the below list.
Minimum Donanım İhtiyacı :
İşlemci : 100 Mhz Pentium
Bellek : 128 MB
Disk : 1 GB
Kurulum için CDROM

What can we do in technically ?

Reporting and Monitoring
RRD Grafikleri : In Retrospectivly RRD graphics providing infos which are below.
• CPU usage
• Total throughput
• Firewall state table
• Throughput values for each interfaces
• Amounts of traffic for each interfaces per second rates
• Connection ping reach time for Wideband Network interface tp gateways
• Que graphs for the system that have traffic shapining
• Real Time Feedbacks
• SVG graphs can monitorised traffic via Real Time Interface
Dynamic DNS : By Providers which stating below let providing DNS service to serve your IP adress as itself.
• DHS
• DyNS
• easyDNS
• No-IP
• ODS.org
• ZoneEdit
Captive Portal
Captive Portal service used on public-access networks that require a user to view and interact with before being granted.This service can also used on corporate network as well to make an extra security layer.With Captive Portal service can customise such as ;
• .Restricting maximum concurrent connections from a client’s ip.
• Idle timeout : Logging of users that status value is idle
• Hard timeout : Logging Off all clients for a specific timeline –
• Logon Pop-up windows : After establishing a connection log off screen could be set as pop-up screen.
• URL Re-Direction : After a succesful authorisation users can re-directed to a certain URL adress.
• Authorization Options :3 options are available.
• No Authorization :Users can only click on portal page and fill the proper section.
• Local Authorization Management : On PfSense a local database can used for users.
• Active Directory Radius Authorization :An authorization type that generally preferred by commercial networks and service providers.Approvement of an users can be done via Microsoft Active Directory or different Radius servers
• HTTP or HTTPS : User Authorization can be done via http or https portal page
• File Manager : Provide different pages or/and pictures uploading to Portal Page

BandwidthdCreating html graphs that shows bandwidthd network traffics.Graphs have prepared on IP base and it can be set as 2,8,40,400 days period.Additionally for each IP usage can keep on cdf format or in a database from 3,3 mins to 12 hrs
SquidGuard
• URL router that have blacklist app and use with Squid.
• SquidGuard ile istenilmeyen sitelere erişim yapılması engellenir ve trafik bir url’ye yönlendirilir.With SquidGuard undesireble web pages blocking to reach and current traffic re-directing to an URL..
• Geriye dönük kayıt tutulabilir.Retrospective records can keep
• By ready made and updated blacklist via internet only restricted categorizes can stated and they can restricted by automatically
• Restricting IP adresses uses to reach websites.

Siproxd : The Siproxd is a Proxy/masquerading server for the protocol SIP.The objective of Siproxd is registrations of SIP clients on a private IP network and performs rewriting of the SIP messafe bodies to make SIP connections work via an masquerading firewall (NAT).
DNS Server : DNS requests from clients, and in turn attempt to resolve queries using all currently available configured DNS servers.
imspector : Imspector can be used on MSN,Jabber/XMPP,AIM,ICQ,Yahoo monitorisation to restricting or inspectoring contents
Dhcp Server ve Dhcp Transmission (Relay) : PfSense can be customised as dhcp server or dhcp request transmission server
Lightsquid : Providing IP/Host/URL base htmt page to observing that Url records created by LightSquid
Freeradius : Freeradius is a software that have free and open source code blocks.With it Radius can be applied on PfSense. 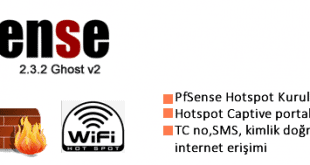